Before I launch into my musings on the undead, I'd like to say thank you very much to Brooke for hosting the first stage of my blog tour and thanks to the Literary+ team for offering such a great opportunity, and especially Paul Carroll, who organised the tour.

Is it the Teeth? - Vampires and Why We Like Them

Vampires have had a bit of a rough ride the last few years, what with some people loving the sparkly ones and others hating them. This is where I look over my glasses and say, 'when I were a gal there were The Lost Boys', no sparkles, but they broke the mould too. No more suave guy in a tux owning a castle, but cool, young dudes in black leather and ripped jeans. I was hooked as soon as I heard the opening theme music! I've been hooked on the toothy guys ever since. 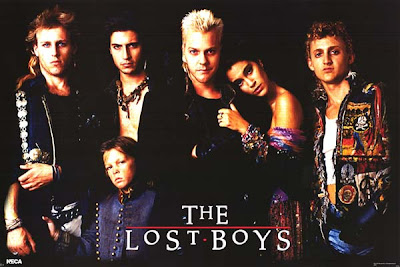 So, why vampires - what is it about them that makes us fascinated by them? After all, when we look at it closely, i.e. the myths our modern stories evolved from, we're talking about walking corpses, or rather, we were talking about walking corpses. Thanks to the explosion of literature and film, we are dealing with many different breeds of vampire in the collective imagination from sparkles, thank you, Twilight ;P, through to monsters close to mindless zombies if we look at movies like Stakeland. I have to state my preference here, I'd go for sparkles over zombie-like vampires, although, my real preference is for somewhere in the middle, so, being clearer, I like my vampires with a mind and a sex appeal. Being female and heterosexual, that means good-looking men, although I can appreciate the beauty of Regine in Fright Night 2 and the strength of Lilith Silver in Razor Blade Smile. They're both strong, powerful women and very sexy - check out those movies if you haven't seen them.

But what about the blokes, then? There have been many guises for the sexually alluring male vampire in literature from Dracula forwards. Although, the vampire's seduction of women lies further back in the legends of incubi, demons that seduced unsuspecting young maidens, draining their life force as they made love to them in their own beds. There are also stories of the devil himself cavorting with witches and suckling from them through extra nipples. Vampires need no nipples and their draining is more literal in the form of drinking blood, not a nice habit when looked at in the cold light of day, so, why then does it make those of us who are fans go weak at the knees? On the surface, for me, it's the eyes and teeth, I find the look of the vampire incredibly sexy, the lure of the beast just below the skin of the man, barely controlled. If we're honest ladies, primal is attractive, but put that under a thin veil of civilisation and the heat really goes up in the room. 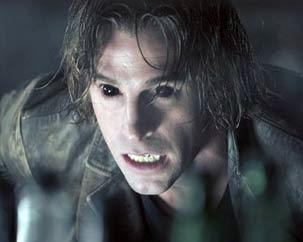 This conflict between human and monster goes beyond purely sexy though, and is why I'm drawn to the half-vampire, the hero partially turned, struggling with new instincts, fighting the power of his master. Before The Lost Boys, I had found the approach in literature and film to this was mainly fatalistic: once bitten, the victim is condemned, there can be no redemption through their own will and, only occasionally, can they be saved through the efforts of others. After The Lost Boys, when vampire victims began to fight back for themselves, use their new strength to combat their would-be masters, I fell in love with the genre. That's why, when I began to write my first vampire novel, Death In The Family, I set it around Tom, who is facing this type of internal conflict, not because he has succumbed to a vampire's advances, but because his father was a vampire. I wanted to explore the challenges faced by someone whose body is changing without their consent and the love-hate relationship they have with the overwhelming power offered by the supernatural.

Near Dark is another movie where the hero's struggle is a pivotal part of the story when Caleb is turned accidentally by Mae. No pointed teeth, or glowing eyes in this one, but I still love the story, because of the battle between dark and light going on in Caleb and the way that brings Mae into conflict with the other vampires as she protects him. Mae is not the ultra-sexy vamp, she's a sweet girl, but her inner strength and resignation to what she has become are just as compelling as any slinky outfit.

In conclusion then: superficially, why I find vampires compulsive reading and viewing is all about the primal pretty. Yet, going deeper, it's the fight between dark instinct and human morality that draws me in every time; that struggle that sets a vampire apart, that makes him, or her aloof and separate from the every day. Some embrace what they are: Dracula, Regine. Others have come to terms with being night breed, but resist, or are afraid of their instincts when faced with a catalyst in their lives: Edward from Twilight, Mae from Near Dark. And, my favourites, the ones whose internal battle drives them from bliss to despair and back again, who live on the edge of their instincts and use that to fight back: Michael from The Lost Boys and, my own attempt at the genre, Tom from Death In The Family.

Sophie was born with the writing bug in her blood, boring her primary school teachers with pages of creative writing and killing her first typewriter from over use when she was thirteen. She began publishing her work on line while at university where she discovered the internet and fanfiction. It took another decade for Sophie to realise her long-time dream of releasing her own original fiction as an author through Wittegen Press.


Death In The Family (Heritage is Deadly #1) 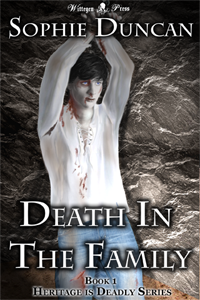 Leaving a good London school with solid prospects, Tom Franklin has the world at his feet. Yet one thing has always haunted his perfect life: his dreams. When Tom discovers that the nightmarish images of dark places and even darker instincts are in fact repressed memories from his early childhood, he must face the heritage from his birth-father, a savage vampire known only as Raxos.

Realising his memories are his only hope of controlling his awakening instincts, Tom returns to, Coombedown, the sleepy, Cornish village in which he was born, unknowing that the night-breed in his veins will lead him into danger.

Death In The Family is a young adult, paranormal novel. 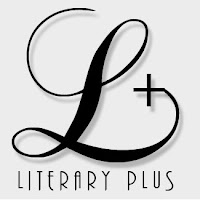 Literary+ is a marketing initiative which was founded and led by Shen Hart. This is a time of evolution and progress, the market is being opened up to e-books and self-publication. As a fellow writer, Shen understands that self-publication is a hard and often lonely road. She started Literary+ to bring together authors and related creative specialities with the goal of helping each other. With a tight knit, friendly and welcoming community at its core, Literary+ holds a strong focus on marketing. As Literary+ continues to grow and evolve it will use innovating, original and experimental marketing methods and schemes to get its member’s books into their reader’s hands.
Posted at 8/27/2012 12:00:00 AM